To many San Pedrans, Dustin Trani is still the kid who grew up in the restaurant – a 4th generation chef with 20 years experience (he’s 30) in the kitchen.

But many were surprised to see his impressive win on Esquire Networks “Knife Fight” where he made fast work of the task, the ingredient, and Chef Vartan Abgaryan of Cliff’s Edge in Silver Lake. And then there’s the inclusion in many “Top Chefs to Watch” type lists in the foodie press.

Now Executive Chef at DOMA, he partners with Sonja Perencevic (owner of the iconic Dan Tana’s) to create a classic Beverly Hills gem of a restaurant – to quote Huffington Post “sophisticated and beautiful”.

His food continues to be inventive, massively flavorful and somehow old and new at the same time. Time spent in Asia informs lovely combinations of Thai textures and tastes, and often the simplest plates surprise with an extra crunch or contrast or combination of ingredients. 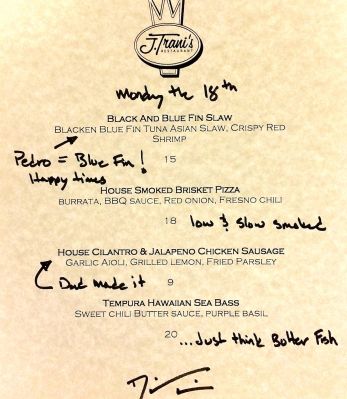 The good news for those who have tracked Dustin’s career is a remarkable pop-up menu some Mondays at J.Tranis on 9th Street in San Pedro.

Just a few dishes, some appetizers, and small dynamic mains: these are some of the best plates in Los Angeles and well worth a phone call to check if Dustin is in the house, and if so, to make a reservation!