To quote a friends Instagram story : look up and be grateful @mypersiankitchen This exorbitant beauty is just what I need....
My two boys are shocked and sad .. me too. Kobe was part of our LA story . William meeting his hero at AngelsGate as a tiny boy, and the ritual watching Laker games on TV with his precious signed hat , wearing the T-shirt and holding the poster :) This feels too sad. #LASTORY #kobe
... I had big plans for the day ......
So no desert palace but the best collection of sticks and twigs and branches ... and Yes Dick was totally OK with stopping the car every mile or two and filling it w treasure:) #tumbleweed #whitesage #desertdriftwood
Date night in meth lab country...
Morning has broken :)🎶 In the midst of despair and heartbreak and infinite sadness when I see what’s happening in Australia and the political idiocy in the USA the colors of the sky, morning and evening bring me calm and soothe the weariness.
The season of light :) Even the little boaty corner downstairs glimmers in the late afternoon . #boats
The travel gods gave us lemons (...no rental cars!) so we hopped the train to LA and arrived home via sublime Union Station. #trainstations #unionstation #losangeles #goodtobehome
...on the bus to Todos Santos:)
After too much busyness a lovely dinner w a birthday friend:) #colossusbread #breatheinbreatheout
In my town we take cars trucks and Christmas decor very seriously. #thegardensfulloffurniturethehouseisfullofplants
... it started w a disco ball:) Thank you @william_arthur @pegeezart @made_by_cbk #LAchristmas #christmas #blueskies #wreath
Winter light :)
Thankful for these 2, missing the others but loving our little Thanksgiving:) Thank you @william_arthur for my happy place/happy space photo #thankyou @foodsage2 we miss you !
I love this! #mosaic #tile
#Iluka #favoritechair
Hours and hours of catch up with an old friend in this loveliness:) Life is so much better ! #girlfriend #shedaesthetic #deliciousness
....probably not at this point .....
Quiet at the river :)
Wish it was my work :) Love this tree! #bark #tree #bundjalungcountry #solace 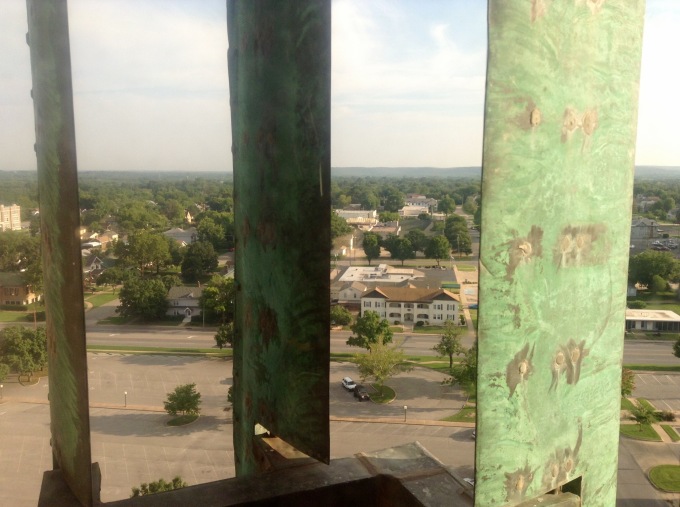 In the soft and green rolling hills of Osage County, described by TV’s Pioneer Woman as the ‘middle of nowhere’ is Bartlesville, Oklahoma: the oil capitol, headquarters of Phillips 66 and the location of Frank Lloyd Wright’s only skyscraper.

Price Tower, named for pipeline company owner Harold Price, is one of only 2 vertically oriented structures Wright built in a lifetime of low slung, horizontal buildings

A road trip detour, after I’d read about the Prairie project sent me to explore Osage County and check out Price Tower.

It’s situated a little out of the original downtown. Not too close to other tall buildings and in a funky office neighborhood with company headquarters, old shopfronts and a noisy restaurant or two.

To see these lovely older buildings in Bartlesville, is to understand the power of the oil and gas industry in Northern Oklahoma. In 1904, just 7 years after the first well was dug, there were 150 oil companies with an office in Bartlesville!

Price originally envisioned a one to four story structure, possibly designed by Cliff May who had already built a home for the family. His sons, however, were influenced by local architect Bruce Goff to get the absolute ‘best architect….Get Frank Lloyd Wright’.

After a phone consultation, and in the thrall of Ayn Rand’s “The Fountainhead” the family traveled to Taliesin West in Phoenix where Harold was impressed to note that the house Wright had built was 35 years older but similarly modern to the family’s May home! FLW convinced them that a tower would cost no more per square foot than a small boxy office building, and pitched a multi use concept with rental office suites and apartments along with the corporate headquarters. Brilliant salesmanship.

By late August 1952 with the site secured, Wright began work on the plans. It grew to a 19 story tower rising from green parklands and tree lined streets.The metaphor of “a tree that escaped the forest” was consistent with his use of green copper vertical shutters, and a tall slender structure.

At the International Petroleum exposition in Tulsa, Wright unveiled a model and announced the project. The May 1953 event drew 250,000 visitors, many oil executives, fellow oil producers and Price’s clients. Lots of buzz.

Construction, with the inevitable cost overruns, was completed and the building opened to the public in February 1956.

It was the most famous new building in America, with visitors coming from around the world to see Wright’s Prairie skyscraper. Although tall buildings were nothing new, multi-use high rise offices and apartments, particularly outside  the major cities, were unusual.

Visiting now, the coolest thing about Price Tower is that it contains a hotel, operated by the non profit that runs the building and adjoining art center (designed by Zaha Hadid). Not luxurious but a singular Oklahomey Frank Lloyd Wright experience with a ‘behind the scenes’ docent tour as part of the deal.

So you stay in one of the corner suites, travel in one of the 4 minuscule triangular elevators ( 2 people and a small suitcase max!) and then hang out in the Copper Bar and cocktail as the sun sets over the prairie. The crowd is eclectic…lots of young IT professionals who work for Phillips 66, design aficionados who drive to Bartlesville specifically to stay in and photograph the building and itinerant academics and workers who are tired of the hotel chains.

Over Manhattans we met a Navajo linguist who gave us a list of out of the way sites to explore, visitors from Tulsa celebrating an anniversary and sharing lots of Osage legend: like where George Clooney liked to eat during the filming of “Osage County” ( Frank and Lola’s), what the Pioneer Woman is REALLY like, how the Tom Mix museum is the most fun museum in the county and be sure not to miss the Bison Preserves.

So much good stuff! 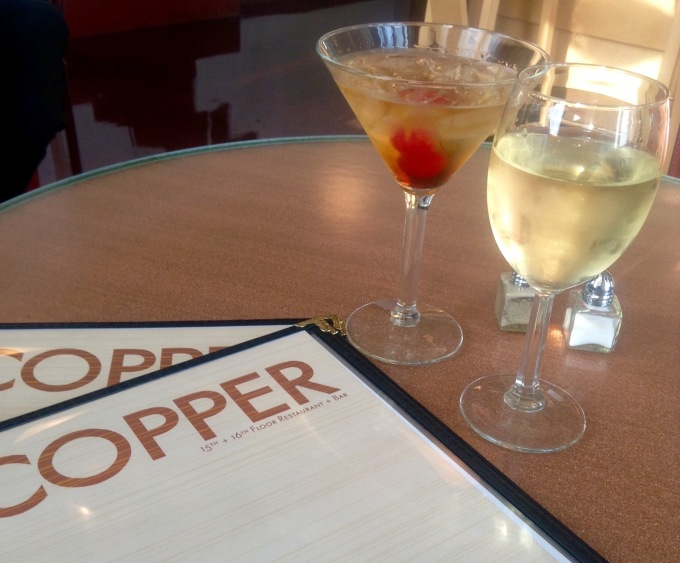 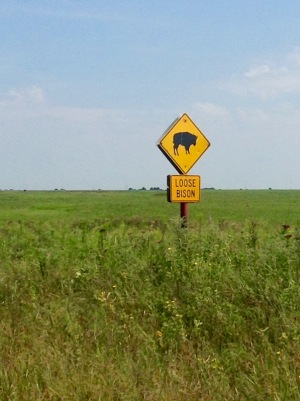 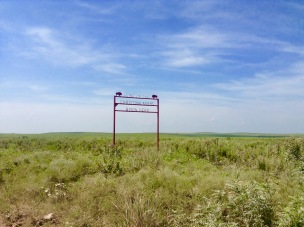 2 thoughts on “The Prairie Skyscraper”