So we walk different quiet neighborhoods and buy things in empty liquor stores: works for me at this stage:) Tonight onions and cilantro, and avocados and garbanzos.....and food swap w a friend : delish French onion soup and garlic toast for us and every green from the farm box spanakopita for them . #chalkart on the footpath.. #didimentionwhitewine
The office :)
Eggs n toast and the best reading all week in the NYTimes ... all precious and much appreciated commodities, the sweetest find in email this morning of famous artist in mask in front of his mural at work, candlelit dinner w lovely ( although still deeply flawed) husband over pasta ( recipe courtesy @camillamacinnes : hadn’t made it in 30 plus years ...super yummy Camilla !) Happy Mother’s Day to all the English mums I know😊♥️♥️♥️
Back from a safe and perfect shopping expedition :) Thank you @colossusbread for the veggies , bread and eggs ( I lucked out and got the last dozen:) A delicious latte while I waited for @thechoriman : sorry we never get to take great photos of our Choriman treats because we eat it like crazy and then say “oh no .. we meant to take a photo ! #communitylove #sanpedro #goodfood
We worked on the beach picking up plastic trash and polystyrene yesterday . Racing to beat the tide and rain ! Afterwards tea and snacks ( at distance from our fellow workers) and my heart melted to see these lovely pieces : milk jug from my old store nosh, another #Veraleebassler teacup and a little vase of mine :) #beauty #nosh #ceramics #beachcleanup #banpolystyrenecups #flattenthecurve
Walking in the field : oh I love this at the end of my street. #solace #whitepointnaturepreserve #thebestkindofsocialdistancing #maybeimeatingtoomuch
Saturday :)
Love it when work takes me somewhere I’d missed until now ...,,
A little sunshine and rain :) feeling springtimey this morning !
Heavenly to take the long way home :) Yes ... lots more branches in the back of the car honey !
Trade show : Palm Springs : Alexander Girard. TRIFECTA !!!! 👏👍😁
To quote a friends Instagram story : look up and be grateful @mypersiankitchen This exorbitant beauty is just what I need....
My two boys are shocked and sad .. me too. Kobe was part of our LA story . William meeting his hero at AngelsGate as a tiny boy, and the ritual watching Laker games on TV with his precious signed hat , wearing the T-shirt and holding the poster :) This feels too sad. #LASTORY #kobe
... I had big plans for the day ......
So no desert palace but the best collection of sticks and twigs and branches ... and Yes Dick was totally OK with stopping the car every mile or two and filling it w treasure:) #tumbleweed #whitesage #desertdriftwood
Date night in meth lab country...
Morning has broken :)🎶 In the midst of despair and heartbreak and infinite sadness when I see what’s happening in Australia and the political idiocy in the USA the colors of the sky, morning and evening bring me calm and soothe the weariness.
The season of light :) Even the little boaty corner downstairs glimmers in the late afternoon . #boats
The travel gods gave us lemons (...no rental cars!) so we hopped the train to LA and arrived home via sublime Union Station. #trainstations #unionstation #losangeles #goodtobehome
...on the bus to Todos Santos:)

I was asked why I decided to spend 6 weeks hiking from France to Spain along the famous Camino de Santiago, and was amazed to hear the words ” I’ve never done a big thing and I really wanted to” come out of my mouth.

When I read that Simon Rodia had said much the same when asked about his Watts Towers I recognized the sentiment.

I first glimpsed the Towers from the Blue Line enroute to downtown LA from Long Beach, but the neighborhood, post 1992 riots  seemed scary. The newspaper photographs from the 1965 unrest flashed through my mind and slowed me from exiting the train. Poetic images of the Towers would appear in magazines, cameos in movies and video games would nudge me to visit, but it took a decade before I finally drove down the tiny streets in Watts to explore.

A big thing in Roddia’s life but almost lost in the suburban megacity that is Los Angeles.

The triangle block is surrounded by small single story homes, an abandoned trolley line runs close by, there’s a small park and remnants of historic 20’s architecture when Watts was a solidly middle class suburb. A suburb growing because of railway lines and jobs and proximity to downtown LA. 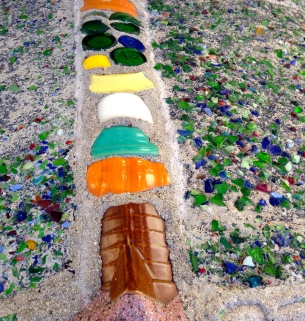 He built in the evenings, after a days work and often walked 20 miles to Wilmington, along the tracks to find materials. He used no electricity or cranes, but constructed each component by hand.

The towers climb 100 feet into the air. And the project took 33 years in all.

I’m drawn to experience these solitary artistic endeavors.The innate sadness versus the fantastical and exuberant, and the physical scale and decades of labor tug like no other art.

And I think of artists who’s work I love, totally different mediums but very often huge scale and for me, strong emotional impact like James Turrell, Michael Heizer and Christo. 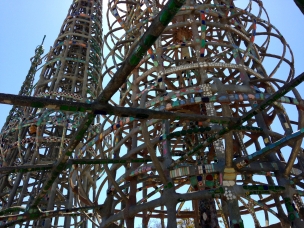 Rodia left Los Angeles in 1955 never to return. He “quit” the site, apparently exhausted by City threats and permit issues, and after a fire destroyed his bungalow, plans were underway to demolish the towers.

In a serendipitous and magical encounter, an actor and a film editor, having seen the towers and knowing of their abandonment and impending destruction, bought the site from the neighbor and set in process the saving of Rodia’s life work. 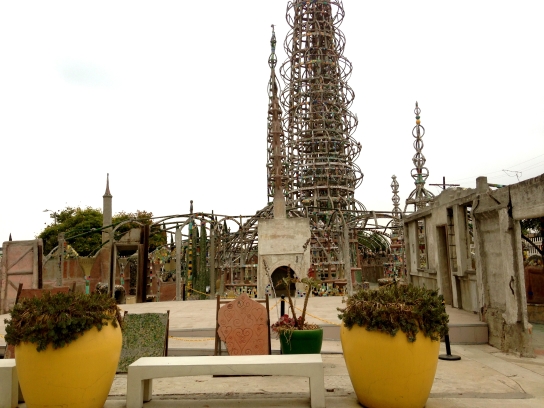 The towers are surrounded by a 10ft chain link fence. There is need for continuing restoration but they are not crumbling or in a state of devastation. In fact, on a clear spring day the crazy Gaudiesque towers, ceramic walls, ships and fountain shapes sparkle with seashells and colorful broken china.

Parking and seeing from the street is free but supporting the small Art Center and taking the $7 guided tour is a good thing. Unless you live totally behind gates or in a secluded, perfect and remote place , the neighborhood is fine. A little scruffy in places, but also cheery and cute around the Towers and along the street. Neighbors have decorated in honor and admiration of the art piece they live next to.

This brilliant and unique folk art is visited by 45,000 visitors a year, mostly overseas tourists and school groups.The Watts Towers may be the finest example of LA outsider art AND an international icon but the least visited by people who live locally.

Los Angeles is an art, design and architecture magnet. Full of singular, iconic buildings and neighborhoods and cool places to explore.

Another really big thing to do!

In a string of old commercial shopfronts on Alma St, San Pedro there is an artisan bakery producing specialty breads that flies under the radar of the foodie press, opens to the public just a few hours each Friday and ships to customers across the Western states.

The Baltic Bakery, operating since 1975,  produces 4 types of bread.

The ingredient list is small: White rye flour, wheat flour, water, whole rye, whole wheat, salt, cornmeal and yeast. Made from scratch using traditional techniques, hand rolled and hearth baked, the loaves are simple and healthy with a comforting texture and flavor…..moist and satisfying and a little chewy . They contain no sugar or fats.

In a bread phobic time they are as close to perfect as it gets! 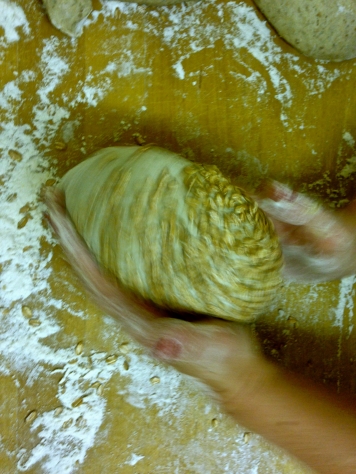 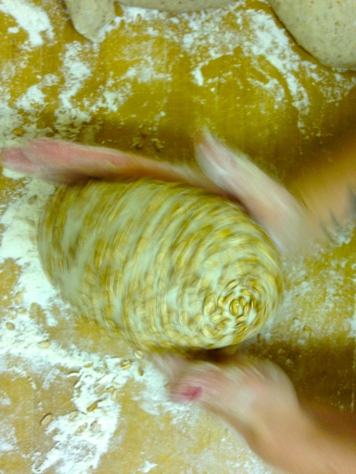 The large kitchen is simple. An industrial size Hobart machine mixes the starter, metal racks line the long wall and are filled with rounds rising overnight, a narrow steaming room adjoins the 10 ft oven and one of the owners, Stephanie, cuts, weighs and shapes the rolls on a small table.

Co owner Stephanie Powell, a New Yorker who came to Los Angeles to work in fashion, always had an interest in baking, and she eventually transitioned from designing high fashion to the restaurant industry. It was in her role as Manager of the much loved Red Lion Tavern in Silverlake, one of LA’s most famous German Restaurants and Beer Gardens, that she first encountered the delicious breads from Baltic Bakery.

Fast forward 4 years and she now partners with Rolf Pfannerer( son of the original master baker, Rudy Pfannerer) and food entrepreneur Aidas Mattis at the helm of a quietly revitalized Baltic.

Spending time watching the bread being made, I’m reminded of those documentaries on noodle makers who use a minuscule pallete of ingredients to produce a beautiful simple food, but spend a life time perfecting their technique. There is a rhythmic calm to the bread production in this bakery. She shared that just 3 weeks ago, a switch in the steam room changed the size of the air bubbles and she and Rolf had to tweak the process, reworking and reinforcing to achieve the same result.

Stephanie is developing a range of pretzels and researching and sourcing a completely organic range of Baltic breads . 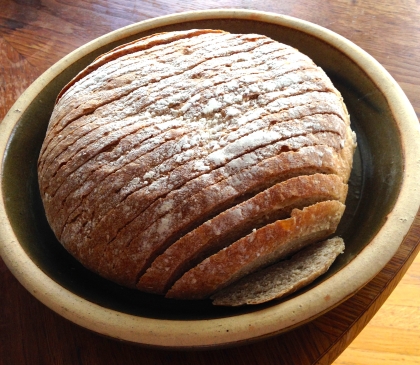 An older customer demographic of Europeans has sustained the bakery until now, but with concerns about gluten and an expanding desire for organic products there is a need to switch it up a bit .

So an expansion is slowly underway but without sacrificing the traditions, techniques and reputation of the 40 year old bakery.

Customers start arriving at 8.30 on Fridays to be sure to get one of the 80 loaves of bread that will sell out by the time they close. They come from all over the Southland, and most have roots in the old world. 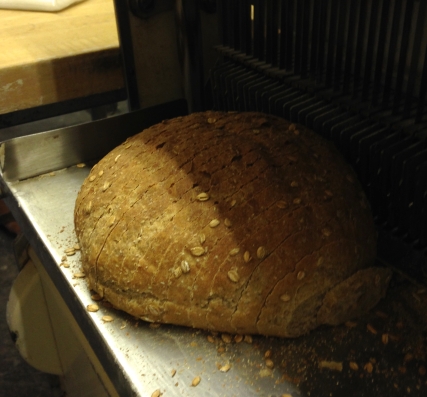 On line and wholesale customers complete the mix with the Baltic shipping to San Francisco, Texas and delivering locally to Santa Monica, San Diego and close by to  Alpine Village…mostly European delis and small independent supermarkets.

My favorite customer story is the guy from Texas who drives to San Pedro twice a year to fill his car with breads!

And favorite plan? A thoughtful and beautiful idea underway where a local Church will use the specially baked, “in the neighborhood”, Baltic Bakery bread instead of commercial wafers for the communion.