Danny Ginsburg started collecting bottle caps when he was 4 years old. It  had started as a game when he was much younger… with baby food lids.He would save, organize, memorize the product codes and collect, until life moved on and baby food was no longer the cuisine du jour!

Did I mention that Danny is one of the smartest people I know?

At four years old, on a family hike, he was tired, bored and complaining. His mother suggested finding something to do for fun and pointed at a Pepsi bottle cap on the ground. She said how they were a ” different kind of lid” and that there would always be bottle caps to find, no matter how old you were.

So began a search for caps, research into bottling plants and factories, stops at the rest areas on highways to see what truck drivers may have thrown out and letter writing to anyone who might have interesting bottle caps. His dream was to get a driver’s license and car, and go drive to where bottle caps where!

The collection grew, and with it the need to find more and more bottled beverages. By the time he was a teenager, he was heading out to find sodas in other cities, unusual local brands from old time manufacturers, often just as they were thinking of closing up shop.He hoarded the diminishing brands, and ever the entrepreneur, brought back some extras to share or sell to friends.

In an industry dominated by a few, really big players, there were possibilities and opportunities, and over the next few years Real Soda in Real Bottles managed to not only track down unique and obscure brands, but to create the beginnings of a distribution network. From a small start in the 1980’s, to obtaining a business license in 1991, Real Soda in Real Bottles is now the major distributor of independent, artisan sodas and a manufacturer of it’s own distinctive brands.

At the same time there was a growing awareness and  desire to drink soda from a glass bottle, which can easily be re used and recycled. Every bottled soda is one less can or plastic nightmare.

There is immense charm and silliness, and an abundance of joy which pervades the world of Real Soda in Real Bottles. The products range from kid favorites to grownup  & sophisticated, historical to hysterical. 100% juices and coconut waters to caffeinated energy concoctions.Neon to crystal clear, healthy to downright decadent. Lots of old time regional brands from across the USA and imports from across the globe. 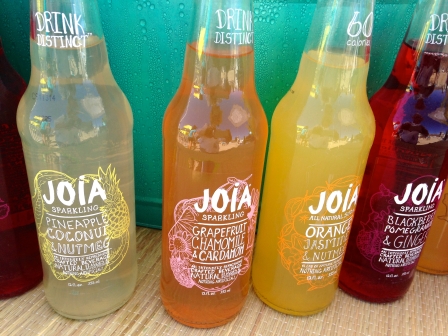 No wonder Danny describes them as the ”world’s best beverages”!

The names and labels are priceless. Boom Chugga Lugga Ginger Ale anyone?

From a HUGE warehouse in Gardena, bottles are shipped across California and to Washington, Oregon, Idaho, Nevada and Colorado.And now across the world.

It’s hard to be wildly enthusiastic about aisles of cheap canned sodas at the supermarket, even when those big companies spend millions trying to convince us to partake.

So much more fun to find a bottle of bubbly yumminess at a favorite coffeehouse, corner store or speciality deli.